Am I allowed to write to the EPO about a patent application filed by another company concerning a product developed by our company?

Yes. Under Article 115 EPC, any third party may file observations concerning the patentability of an invention claimed in a published European patent application. They must be filed in writing in an EPO official language (English, French or German), and must state the grounds on which they are based. There is no prescribed EPO form for this. The person submitting the observations is not a party to the patent grant proceedings, and is therefore not informed by the EPO about their further outcome.

The observations are communicated without delay to the applicant or proprietor, who may comment on them. If they call into question the patentability of the invention in whole or in part, they must be taken into account in any proceedings pending before a department of the EPO until such proceedings have been terminated, i.e. they must be admitted into the proceedings. If the observations relate to alleged prior art available other than from a document, e.g. from use, this should be taken into account only if the alleged facts either are not disputed by the applicant or proprietor or are established beyond reasonable doubt. Observations by third parties received after the conclusion of proceedings will not be taken into account and will simply be added to the file (see Guidelines for Examination, E-VI, point 3 and Rule 114 EPC).

How can I submit observations about a published application or granted patent?

Here are the EPO Munich's postal address and fax number:

May I raise objections against an international patent application?

Since 2 July 2012, third parties have been able to submit observations to the International Bureau about prior art in published PCT applications if they believe that the invention claimed lacks either novelty or inventive step. They can do this as from the date of the international publication and up to 28 months from the priority date. They can use WIPO’s ePCT system or the Patentscope search system.

How do I send observations via the European Patent Register?

Can I file third-party observations by email if the online form is not working?

Procedural acts cannot be performed by email. If the dedicated web-based form is not working you can always file your observations by post, fax or on Form 1038 within the Online filing software or Online Filing 2.0.

What is the file size limit for third-party observations?

Why have I not received a confirmation copy of the observations I submitted?

To receive a copy of your third-party submissions, you must actively tick the box on the submission form. This is deliberate, and intended to enable third parties to remain anonymous if they so wish.

I have been trying to file third-party observations using the web form but I get a "please wait" message that remains on the screen and does not allow me to file my comments. What should I do?

You should be able to get round this problem by using a different browser or a different PC.

How can I submit a larger number of attachments than the maximum allowed in the third-party observations form?

If you reach the maximum number of attachments, simply create a new form with the same details and attach the rest of the documents. You can create as many new forms as you need. We will collate them into a single electronic document when we receive them. 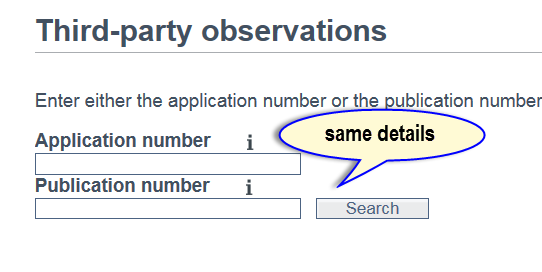 What should I do if I was unable to submit the third-party observations form due to the size of the attachments?

Simply create a new form with the same details for each of the documents separately. You can create as many new forms as you need. We will collate them into a single electronic document when we receive them.

What should I do if, when I click on the preview tab, I can only see a blank and am not able to submit the form?

This problem may be due to your firewall settings or antivirus programs. Please try submitting the form from a different computer or using a different browser.

Which browsers are supported for filing third-party observations using your web form?

All browsers, including Edge, are supported.
If you experience problems filing third-party observations, and switching to another browser does not help, it could be that your firewall, anti-virus software or browser configuration is preventing you from completing the upload operation. Please try to send the observations from another PC or via alternate means.

When can I file third-party observations using the web form?

You can file third-party observations using the web form only as from the day after the EP publication date. If you wish to submit observations before that date, please file them in another way.

How to apply for a patent

A step-by-step guide to the grant procedure

Start of new system expected in 2023

Listen to our podcast

Search for events and training by topic, date, location or target audience